Ok…just to get the literal elephant out of the room (and, yes, I know it is a detour out of a travel blog …but the byline DOES say the blog will reflect my thoughts/perspective!), I’m jumping ahead to today’s actual posting date and then I’ll get back to our chronology. I HAVE to say how saddened, disheartened and worried I am for my country that has voted in a man so full of spewing hatred directed particularly (but not only) to people of color, Muslims, immigrants, LGBTQ, indigenous people,  and women.  To quote my friend, Seamus Kirst: “I denounce white supremacy and racism and hate, and I am so ashamed of the millions of people who embraced it when they walked into those polls.” I will say that it is that much more shocking to me now that I have spent time on the river chatting and sharing with people from Tennessee, West Virginia, Mississippi, Kentucky and Alabama and found them to be so open and giving and warm.  I can now only imagine how two-faced their behavior has been only because I am caucasian on the outside.  As I said after the visit to the Birmingham Civil Rights Institute last week,  I  remain perplexed at how and why people hold such deep fear/hate in their hearts.  I am weary of the fight though and the thought of the 50 steps backward our country has just taken is overwhelming.

Despite getting up early, we still managed to delay pushing off and out of Hide-Away Harbor Marina until nearly noon due to Home Depot and post office trips, rental car return, and repairs to the “sister-boat’s ” bow/anchor/roller/windlass thingy. (Nothing major, in fact, the time I took to describe it was about as long as the job should have taken)  But as a result of all of N’s running about on the above delays, B set herself to bringing the “back patio” (some in the boating world call that the Aft Cabin) up to chlorox -bleach- white levels.  N returned quite happily surprised to the brilliant shine. It only took one dirty lock and some Fall leaves to un-do most of the work.

As a result of the late start, we ended up meeting even more people at the marina.  As I‘ve said in earlier posts, it is truly amazing how open-hearted and literally giving people we meet “on the river” are.  Today we got these cool hats as gifts simply because we were raving how much we loved this Black Warrior River!

So we headed back down the river –first time we’ve backtracked a significant mileage.  So it’s been fun to compare the mileage with vs against the current: about half a gallon better per mile heading down river.  We stopped on this soft, sandy beach for some snackies and wading (and dog walk).

In addition, because of the late start and lots of lock delays, we didn’t make it as far as we had tentatively planned ( if I’ve learned anything, as soon as you make a plan, or pre-write something in the Log Book, it needs to get re-assessed), so we anchored again in front of Andy’s Place (see post from a few days ago)  He didn’t come out to greet us this time; but his wife hollered and called off and on like a small screaming child between midnight and 1 am for her cat (who was equally howling in pain for some reason farther up in the woods –but the wife didn’t hear it).  As a result, Ziggy woke up and barked nervously every 20 minutes. Once awake, B got no sleep wondering what to do about the poor cat. N slept through the whole thing.  Yes, he does happily (and accurately) acknowledge that “we” get a much better sleep (normally) in the boat than anywhere else.

In the morning, we headed back to Demopolis  (where we already spent a few days last week); but where we need to re-position ourselves for the big jump off for the final section of the “River Leg” of the Loop.  But not before the final lock on the Black Warrior River….where we had such a looooong wait (the Army Corps of Engineers were doing a repair), that we asked permission to tie up to an unused, beached barge. Kinda fun to walk around and look at all the knick-knacks laying around.

Anyway, for us the day was clearly a foreshadowing of the backtracking yet to come on election night:  repeat scenery in the opposite direction….  so that’s about it.

Today we journeyed 50 minutes northward-ish to Birmingham in the rental car and after finding the CLOSED (permanently) West Marine where we had hoped to find more doodads and thingamajigs to add to our collection (including a new flag pole thingy for our Looper burgee/flag on the bow), we continued on to the Civil Rights District of Birmingham and were steeped in impressions that left me as sad as the Holocaust Center in Jerusalem but still with some hope too and thanks for all the work of those who went before.

First we visited the very well laid-out tons of meaningful exhibits at the Birmingham Civil Rights Institute. No words nor amount of pix I could put here can approach the impact. Please go if you ever have the chance. But here are a few:

I know this might look boring to most, but as a “recovering lawyer” this whole section of the summaries of over 20 landmark decisions and court battles meant a lot to me:  I thought of all the pain and humiliation, the leaders’ fights and doubts, the citizens’ guts, the bad guys and why they felt so compelled to fight so hard to perpetuate the indignities, the amount of work and sweat in each lawsuit, the joys of the wins and too frequently the compounded pain of the losses and, all while still always knowing there was more to be done to erase the invisible lines/barriers/sentiments even if the legal ones were straightened out.

They had a board like this for a handful or so of other countries with historic landmark rights demonstrations, etc.

Aside from visiting the Civil Rights District, the whole point of our venture to Birmingham was to check in and visit  Vicky, our “chinese daughter,” who lived with us a year or so ago. She is now attending  University of Alabama at Birmingham (UAB)

So Vicky took a break from her studies and joined us for a few hours of lunch and more site seeing (and dog walking/chatting):

After saying good bye to Vicky (and thank you for the nice little gifts she brought), we made it back to our boat zone and Ziggy and I walked down the mile  via this little country road.

It was about an hour before dark and we decided to undock and jump across the river/lake to a cove and anchor for the night. It was the right decision and an indulgent way to escape/heal/rejuvenate the emotions of Birmingham (and the country’s) past. 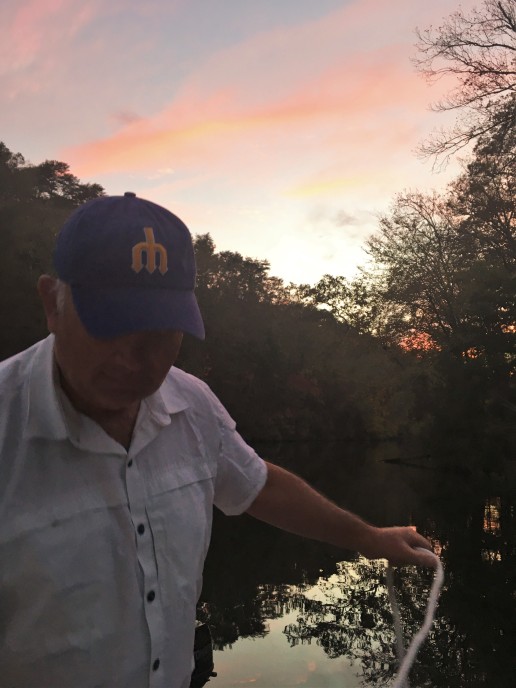